Let us see how we could set up the ROS serial communication between a Raspberry Pi and an Arduino board. So, our very first integration attempt is to integrate the Raspberry Pi with Arduino. We will use the Raspberry Pi 4. Let us break this down into the following steps:

It is pretty easy to get your hands on the Pi, so just go grab one and follow along.

The very first step with setting up your Pi is to install the base OS. You have many choices, but two of them stand out which is installing either Raspbian or Ubuntu. I prefer to run Ubuntu and ROS is very much compatible with Ubuntu, so why not!

Head over here and make sure to download the Ubuntu server 20.04 64 bit LTS version (we will use ROS Noetic which is based on Ubuntu 20.04 LTS)

After you have downloaded the image, head over here for a comprehensive installation instruction. It is pretty easy and straightforward!

First let us setup Arduino. Now you could do this on your Raspberry Pi 4 or any other computer. You need to install the Arduino IDE.

The idea here is that we need to be able to make your Arduino serial communication capable and for this we have to install a few ros based libraries. There is nothing more specific to the Raspberry Pi 4. You could do the below steps from the Raspberry Pi 4, but assume that your Raspberry Pi 4 will be the server (probably running in your NAVO), and you do not want to have any IDE running on your production server, so I would set up my Arduino IDE on my Ubuntu machine.

The next step is to prepare and install the serial libraries that is required to make Arduino communicate with the Raspberry Pi. So for this, open a terminal window from the Ubuntu machine and run the following commands one after the other.

Make sure to replace the ROS version appropriately. For me it is Noetic!

After this, fire up the Arduino IDE, by typing arduino from a terminal window (see the screenshot below)

After this, open a new terminal window and cd into the arduino folder, and then cd into libraries directory. From that libraries' directory, run the following command below. This command should build the needed libraries that will be used by ROS.

If we now type the dir command, we should see the following:

As it can be seen that there is a new folder called ros_lib. That's all it with the setup. Let us now proceed to run some code in the Arduino. We will use some inbuilt program that will blink an LED upon receiving a message from a ROS publisher node.

Fire up the Arduino IDE, and Go to File -> Examples -> ros_lib and open the Blink sketch program.

Upload the code to Arduino. Make sure your Arduino is plugged into the USB port on your computer. To do this, either run Ctrl + U command from the Arduino IDE or Go to Sketch -> Upload which will then upload this program into your Arduino hardware.

Now it is time to test our setup. Open a terminal window on the Ubuntu machine and issue roscore command. TODO: THIS SHOULD BE RASPBERRY PI!!!!!!!!

Now let’s turn on the LED by publishing a single empty message to the /toggle_led topic. Open a new terminal window and type:

On my machine, all the three commands above look like this. I'm using Tilix as my Terminal program. Note that additionally I'm tailing on the messages that gets published to the /toggle_led topic

I made a small video to see this peanut setup in action! Click the image below for the video! 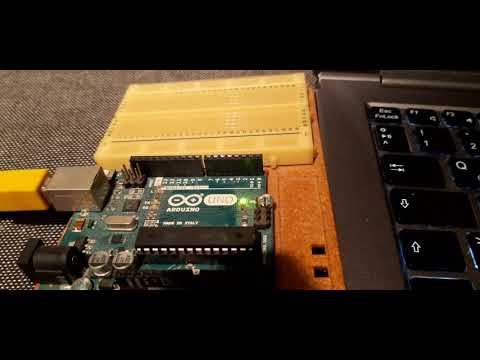 That's all it. To shutdown your Arduino, just disconnect it from your computer's USB port!

While testing this setup, I faced some issues with the ros serial library:

To resolve this, do the following:

Hope it made sense!

Bits & Pieces of something that I write! Glad you found me....
Read More